Before, Cross-fit and boot camp; before Fit for Life, Good Life, and Gold’s Gym; and before BX-93 and Bowflex home gyms, a six-year-old boy in Northern Québec used nothing but wood and persistence to get in shape. In 1945, his father drilled a hole into two large wooden logs and improvised a broomstick as a handle bar. Seventy-three years later, the weight lifting pioneer and living legend of strongmen, Fern Boucher, still has his first set of weights.

Standing at 5,4”, weighing 143 lbs, you’d never believe that this small French-Canadian can dead-lift 600 pounds. Nor does the 79-year-old show any signs of stopping. On his 75th birthday, he attempted to set a Guinness world record by lifting 3.5 times his body weight, a total of 510 lbs, using a diamond bar that he welded himself! Three years later, on his 78th birthday, he lifted an even more impressive 600 lbs tire. Even more impressive, on May 3rd of this year for his 79th birthday, Fern deadlifted 401 lbs behind his back (a kind of lift known as “hack lifting”)! Click here for link to video.

Pound for pound, in the age 65+ Masters group, Fern Boucher is the strongest man in the world.

I interviewed Fern in his basement gym. The small room is filled with homemade workout equipment welded by Fern himself. The walls are plastered with old newspaper articles, photos of family and weight lifting competitions, and even a nostalgic ID photo from his time working in North Cobalt’s mine. Between sets, Fern shared his first experiences with weight lifting and explained how he got involved in the sport. We were also joined by Mike Preston-Engel, a good friend and long-time fan of Fern. Our interview was condensed for length and clarity.

Claire: Can you show me what your regular workout is like? What’s your routine?

Fern: First, we’re going to start with chin-ups. Me, I don’t have any biceps. Which means that I can’t do curls or bicept lifts? Many years ago, my chiropractor said that I would have to start training by doing chin-ups so that the muscle would be replaced by the triceps. Ok, ok, ok. So, I’m going to do three different kind of chin-ups.

Mike: That’s mostly to give the muscles a stretch. He makes most of the stuff that he works with too.

Fern: So now, I’m going to work out my shoulders with this thing called a torso track. What it does to those muscles here [points to shoulders and triceps], you wouldn’t believe. Then I use what’s called a chock lowis? I’m pulling my body weight plus that of machine on an angle, up hill. Much, much, much tougher. Now this machine there, when I’m using it, I do 125 reps. When I’m training with this machine, you want those muscles [points to triceps] to become almost as big as a baseball.

Claire: Now Fern, I notice that you’re wearing socks while you’re doing your workout. Why is that? Shouldn’t you be wearing shoes to protect your feet?

Mike: Actually, most of the professional weightlifters, when they’re doing lifts, are in socks. One of the funny reasons, is that when you’re wearing a shoe, you have to lift it that much higher. In this sport, every quarter inch counts. So, if you can have an advantage of being closer to the floor, you don’t have to lift it as high.

Fern: Haha, you’ve got that right.

[At this point, Fern took a break from his workout to catch his breath]

Claire: How did you get into weight lifting?

Fern: That’s a very old story. In 1945 – that’s a few years ago, eh? – my dad used to cut wood logs. He drilled a whole on each end and put a broom stick handle through and I’d play with that. I was 6 years old. And then, in 1952, I bought my first cast iron set of weights. I was in business then.

Claire: What do you like about weight lifting? I mean, you were 6 years old when you started. Why did you continue to weight lift over 73 years later?”

Fern: Well, when I started with school at 6 years old, I got beating up by the bullies. So, I decided I’d lift weights. In school then, all the grades were in the same school. There were guys that were 15/16 years old, and that’s when the beating’s started. All the big guys always use force. That’s never changed and never will. In 1972, Mike Gibson in New Liskeard announced that they would open a Marshall arts class. I  was the first one to join the school. And then I went back into weight lifting. So that’s how things happened. For me, staying physically strong was a way for people to respect me. This is what it’s all about. I competed in strongman for 25 years. I used to drive to Kirkland lake to get some teaching up there in weight lifting.

Claire: You’re not just a weightlifter, you’ve also been on the other side too organizing weight lifting competitions. Is that right?

Fern: Yeah, I was putting on meets in 1978. That’s 40 years of putting on strongman competitions.

Fern: Ya, with the bikers it was always for cancer. And furthermore, weight class in the strongman has never been seen and probably will never be seen. [Weight class means that strongmen are competition according to their weight.] So, it’s not just about being the biggest, it’s about being the strongest.

Claire: I can see why weight classes would be important for smaller weight lifters, like yourself. What’s it like to be a small weight lifter?

Mike: If I may, I’ve noticed that he’s left a legacy behind. He’s known by top strong men in the world as a living legend. And to be called a living legend, is extremely rare. He is showing everybody that it doesn’t matter what size you are, there’s space for you in this sport. The biggest guys always stand on the podium at the end, but you need to ask yourself, ‘how much did they lift?’. Fern doesn’t realize how many people know him. There are people all over the world that know Fern Boucher, in part because of the diamond bar [which he invented and welded himself], but also because pound for pound, nobody can lift as much as Fern can. He lifts 4 times his weight.

Claire: Wow, what’s the most you’ve ever lifted Fern?

Claire: That’s incredible! Do you ever plan on retiring?

Fern: I’m not ready yet. I lift just as much now as I ever have. My training is a quarter of my fitness. I never give up. On Monday, I do the torso track. Tuesday, I do the torso track plus the lowis. On Wednesday, I do chin-ups. I do sets of 12, all day, take a break in between, so I start at 8 in the morning and end at 8 at night. That way, I get 10 sets of 12. But my breathing makes it difficult because I worked in mining, with all of the smoke and chemicals, my lungs are not the greatest. So, when I lift now I have to do it according to my breathing.”

Claire: Did you have any role models throughout your weightlifting career? Who would you look up to?

Fern: That’s a good question. In the 30s and 40s, there was a little man by the name of Louis Cyr. He was the strongest man the world known, to this day. He was Canadian. Arnold Schwartznager too. And a man by the name of Victor DeLamor (from Québec). He was also 165 lbs so he was also a little guys. Louis Cyr though is still considered the strongest man in the world today.

It’s clear that this strongman will never give up. It was a privilege to interview Fern, not just because pound for pound he the strongest man in the world, but also because he’s my grandpa. Spending time with my grandpa in his basement gym as he shared his passion with me was a unique and unforgettable experience. Follow Fern on Facebook to stay up to date on all of his latest achievements and extraordinary feats of strength. 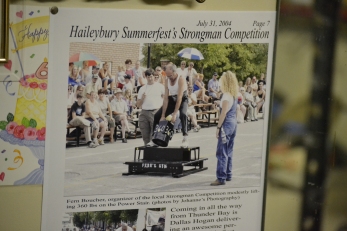 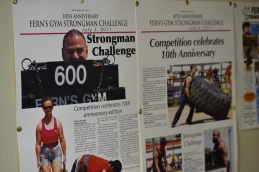 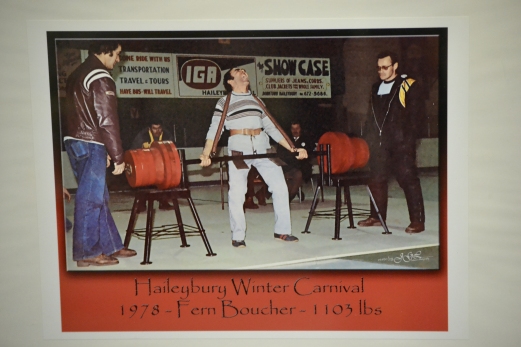